What a day! So busy in fact I came right to my campsite and immediately fell asleep. The day started with an amazing tour of Olana, before which I watched a video in the museum center. Frederic Church had some INSANE chops.

They are working on the grounds to restore open spaces and viewshed to they way Church designed them. (Not sure if I mentioned that already). He thought of his landscaping as a "living painting" and as I mentioned yesterday, his house was a never-ending art project as well. He designed the carriage roads and trees leading up to the house to have a "big reveal" - you can't fully see the house until you come around the last bend in the carriage road. The stick benches around the property were recreated based on photographs of the grounds.

The house is more or less as he left it when he died in 1900. No photography in the house so I will pull a few from the Internet. I walked in the front door and the foyer is this magnificent purple color with a golden yellow ceiling (my favorite color combination...ever) and there is yellow-orange glass in the front door windows. Most of the paintings in the house are his studies for larger paintings - to which I say these are incredible paintings in and of themselves. They're about the size I usually work in the studio, ranging from about 11x14 to 16x20, with some longer in a more "landscape" shape. They felt familiar to me, in the sense that I'd seen photos of most of them before, but also the size and presentation felt like seeing the source of my inspiration. You can read about the size of a painting but, large or small, it is an entirely different experience to see it in person. The frames are all his original frames, and he (no surprise here) custom designed the frames for his larger pieces.

Church never did portraits, which I thought was interesting. Pure landscape. He painted the ceiling in the great room light blue with a ton of varnish to reflect the sky. He mixed all the beautiful colors and designed the stenciled details throughout the house. There was no radio or TV in his time and they had a small stage in the living room for performances, readings, short plays, etc.


He really was a celebrity in his time. He'd have big unveilings of his artwork where people would pay money to go behind a curtain and view his newest large painting, which itself would be surrounded by elaborate curtains and intricate gold frames. He had a self portrait done, which was transferred into a print that could be produced in newspapers. So people knew his face too, which added to his celebrity in the states and abroad.

I tried to check out some of the books on his shelves - lots of science and natural history books. The study room has a crazy small desk and it turns out his wife was 4 feet 9 inches...!!! Then we saw his studio which was amaaaaazing as his art supplies have been very well preserved. There are brushes with paint dried in them! Bristle brushes (after the tour when it was raining I went to an art store and bought 7 bristle brushes) and his paint tubes. I wish more of them had been turned so I could read the colors. I could only see "Roman Ochre" and "Chrome Green" by Goupil & Co Paints. It was surreal to see his studio and supplies. I don't even know how to describe it or what to compare it to. He created masterpieces with those very brushes, used those very colors, painted at that very easel. As an artist I have a real connection to process and art materials, they're the bread and butter of my job. I think seeing an artist's studio would be the most fascinating thing to see of any artist.

Back at the museum center, I was inspired still by the interpretive signs and posters of Church as an "Artist, Explorer, and Naturalist." He felt a "personal responsibility to preserve Americas natural and cultural resources for future generations." At his funeral, Charles Dudley Warner said: "We can scarcely overestimate the debt of American to Mr. Church in teaching it to appreciate the grandeur and beauty of its own scenery. He aspired to interpret nature in its highest spirited and aesthetic manifestation..." What an artist. Maybe someday my art will inspire the same.

Explored the rest of the grounds until it started raining...He did many beautiful sketches and paintings of the grounds here, but I have to move on to Thomas Cole's work in the Hudson area. 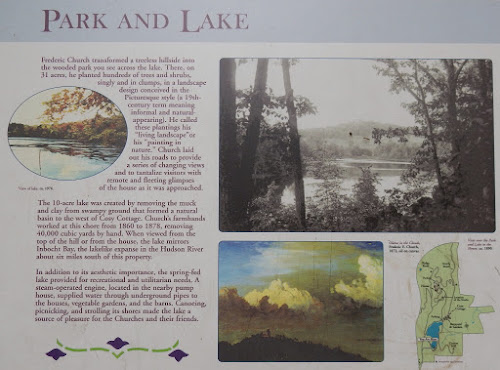 Since it was raining, I decided to go do the tour of Thomas Cole's house that I'd planned on doing the next day. So here I begin to transition to the next artist I'm studying, the founder of the Hudson River School. Probably made more sense to start with him but after being out in the field and painting I think I have a better appreciation for these museums and the "home base" where the movement started.
His painted sketches, and some of his paintings, aren't very good. Church was a much better draftsman than Cole was. But I realized as I was poo-pooing his artwork that he didn't have anyone to reference or look up to or study with. Nobody had done this type of painting, and of this country before. Many large paintings of war scenes included landscapes but the landscape was by no means the focus. He didn't have anyone to guide his process. And figurative work was still "in fashion" so I believe he felt as if he had to include figures in his work for it to be recognized and appreciated (but I know I'd appreciate his work more without figures...he wasn't a skilled figure artist...)
Thomas Cole was very taken with the Catskills and thought the scenery was majestic and awe inspiring. He would go out and sketch, then go back to his studio and do a large drawing, and wait for time to "draw a veil over the details" so he was left with what was most essential. He had a very romantic and spiritual view of nature, which shows in many of his works and large series. Cole was much less scientific in his rendering of landscapes than Church was. The Hudson River School really started in 1825 with his first visit to the Catskills. Cole fell in love and got married (she left him flowers on his easel...awwwwww...). More of the area was covered with industry and farms than it is today. Cole traveled all the time - similar to Church - and truly paved the way for other landscape painters in America. He died at age 47 and was mourned by many (apparently he got sick, refused to rest, kept painting, and died like a week later. Artists of the world take care of yourselves!) I will continue writing more on Cole this week - but that's a good overview.

So here's what I hated about these tours: there's an exhibit of modern art inspired by Hudson River School artists called River Crossings going on at both Olana and the Thomas Cole site. I did not like it. There was modern art infused in every room of Olana, and taken over almost every room at TCHS. I came to see Thomas Cole and Frederic Church's artwork, not the modern art. In one patio at Olana I thought, oh they're doing construction...nope, it's an installation, and it is a pile of bricks. Supposedly arranged to mirror ancient ruins that Church saw on his trips to the Middle East blah blah it was bricks on a porch. And a photograph of a landscape folded into a fan pattern. And giant photographs. And a tapestry of Chuck Close. At TC there were three rooms with just work from this show, none of Coles work at all. Call me old, call me whatever, but these works did nothing to inspire me. They felt vapid and shallow in execution compared to Church's work especially, and I would have rather heard more about these artworks than the modern work in each room. Again, I have an interest in truth, and I think most art like this takes us farther and farther away from what actually exists around us. But I guess that's a reflection of our time, caught up in technology, so maybe it's good "modern art" ?? Ahh, the questions artists will ponder and debate for many lifetimes. If you can tell, I am starting to better form my own opinions on art and where I fit in today's artworld.

Went back to Olana since the rain had stopped and painted the late evening light, which then turned to sunset and the ,ought changed to much for me to finish. Did a quick sunset sketch - the light was a very soft yellow. I'll have to come back to finish the one painting...luckily Thomas Cole wasn't very into sunsets so I'll have time in the next few days. Starting to follow the Hudson River School Art Trail tomorrow!

Posted with Blogsy
Posted by Emily Boutilier at 10:05 AM